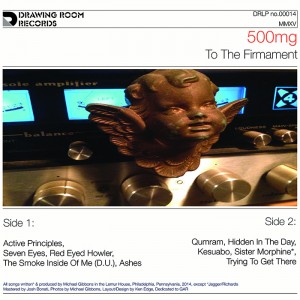 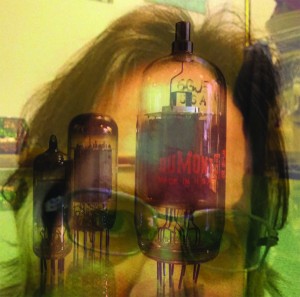 “To The Firmament” is the third and finest album released from 500mg, Michael Gibbons of Bardo Pond. Unlike his previous and primarily acoustic guitar affairs, Mr. Gibbon’s latest album showcases a higher level of experimentation and varied sounds and techniques. Samples of viola, cello, trumpets, and other various sound forms are incorporated in the well-established 500mg guitar-based framework. Voices (and not just the ones in your psyche) can also be heard, even prominently on two tracks, one being Mr. Gibbon’s take on the Stones’ “Sister Morphine.”Programmed and sequenced as two suites, “To The Firmament” takes the listener on a cinematically dreamlike stated journey. Through the album’s use of spoken-word, sub-conscious visions may appear real upon multiple listens. All of this, of course, is quite heavy.

Pressed on 180-gram vinyl with an 22/11” foldout poster included, the LP is limited to 350 copies. An unlimited download version is also available.